A BLE peripheral device can advertise to allow detection and connection by BLE central devices.

For details of the format see Advertising Data Format below.

The TruConnect device acts as the Peripheral.

To start your TruConnect device advertising:

By default, a TruConnect device advertises the TruConnect Service ID and the default module name. See UUID and Name for details.

The advertising packet and the scan response packet have the same general format.

The BLE advertising packet and scan response packet both consist of one or more structures of the form:

Unused octets are set to 00.

The diagram below shows the general structure of the advertising packet and the scan response packet. 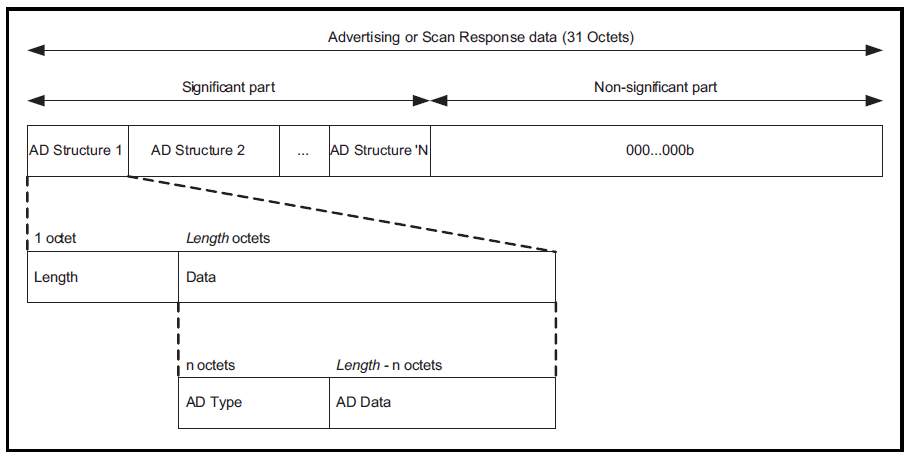 In the example tables, the top row shows the octets in the advertising packet or scan response packet, with data in hexadecimal notation. The Least Significant Byte (LSB) is on the left. Unless otherwise noted, data is sent in little-endian order. Some proprietary formats package the data in big-endian order.

The bottom line shows the interpretation, with numbers in decimal notation. Configurable parts of the advertising packet are emphasised.

You can then supply data in any format for the 31 octets of the beacon. You can use the generic beacon to advertise in any format, including open formats such as:

The generic data, including the leading two octet Manufacturer ID, is delivered in the order specified in the bl v d b variable argument, with the leftmost byte of the argument representing the least significant byte. To send the example advertising data above, set bl v d b as follows:

The iBeacon format is essentially a generic data beacon with a proprietary internal format. It uses 30 octets of the possible 31.

The configurable part of the iBeacon content is UUID, Major, and Minor, specified in the bl v d i variable. The setting corresponding to the example above is:

Note: iBeacon is a proprietary format and does not follow the general BLE specification requiring little-endian order. Within the iBeacon data, the UUID is displayed in big-endian order (Most Significant Byte (MSB) at the left).

The last byte of the iBeacon is a single-octet Tx Power. This is 2's complement format, representing RSSI measured at 1 metre from the device, calculated by TruConnect based on the TruConnect device's antenna and settings. The Tx power value B9 in the example translates to -71 dBm.

This is the default advertising mode for a TruConnect device.

UUID and name are determined as follows:

On the TruConnect terminal, LSB at right:

The name is a string of ASCII character codes, and appears in the advertisement in the same order as the string. For example, the name AMS-ODC4 appears as 414d532d30444334.

The entire advertisement, using the TruConnect Service ID and example name above, with LSB at left, appears as:

The GPIO data structure follows in the scan response packet, in the format:

In the example, the Mfr (Manufacturer) type and ID are as described in Supplement to the Bluetooth Core Specification, Part A, Data Types Specification Section 1.4, Manufacturer Specific Data.

The Subtype:GPIO is a proprietary format determined by ACKme networks.

To control which GPIOs appear in the GPIO data, use the bl v d g variable to set the GPIO mask. The default is FFFF, with no GPIOs masked.

The result in the scan response GPIO data appears with LSB first, so when both GPIO 6 and GPIO 9 are high the GPIO data is 40 then 02.

Note: GPIOs must be set to STDIO function for their levels to appear in the GPIO scan response packet. See Peripherals for details on setting GPIO function.

Eddystone is an open beacon format from Google that works with Android and iOS. See https://github.com/google/eddystone

You can construct Eddystone beacons using the generic beacon type.

Only the value of the flags can be modified.

The Eddystone URL Beacon begins with the preamble above.

To set the value of bl v d b to the values in the above example URL beacon:

With an app that can decode Eddystone beacons, the URL reported for the above example is http://sensors.com

The codes for URL scheme and domain are decoded into the expanded text when encountered. You can refer to domains not included in the encoded list by spelling them out in full. Ensure the Service Data Length is adjusted to truncate at the end of your URL. For example:

The URL reported for the above example is http://ack.me

The Eddystone UID Beacon begins with the preamble above.

The UID namespace and UID instance are in big-endian order.

To set the value of bl v d b to the values in the above example URL beacon:

The Eddystone TLM Beacon begins with the preamble above.

Note: All data types are in big-endian order.

The Eddystone TLM beacon should be sent directly after an Eddystone UID or Eddystone URL beacon, so the telemetry data can be associated with an identifier. In the Google Eddystone TLM documentation this is called interleaving.

Note: To be of value, Eddystone TLM beacons must be created dynamically. This requires an MCU or other controller device to assemble the beacon from data read instantaneously from the TruConnect module, and program the TruConnect device to send the beacon using the set bl v d b command.

AltBeacon is an open protocol for proximity beacon advertisements.

You can construct AltBeacon advertisements using the generic beacon type.

The full AltBeacon PDU (Protocol Data Unit) starts with the standard 3-octet flags structure, and has the following layout

To send the above AltBeacon advertisement, set bl v d b as follows: